Mixing up a batch of this sparkly reindeer toothpaste is sure to get any little scientist excited about chemistry.  This pepperminty holiday twist on the popular Elephant Toothpaste demontration uses just a few ingredients but the results are amazing!  If only my kids toothpaste could be as fun reindeer toothpaste, maybe I wouldn’t have to nag them to brush everyday. 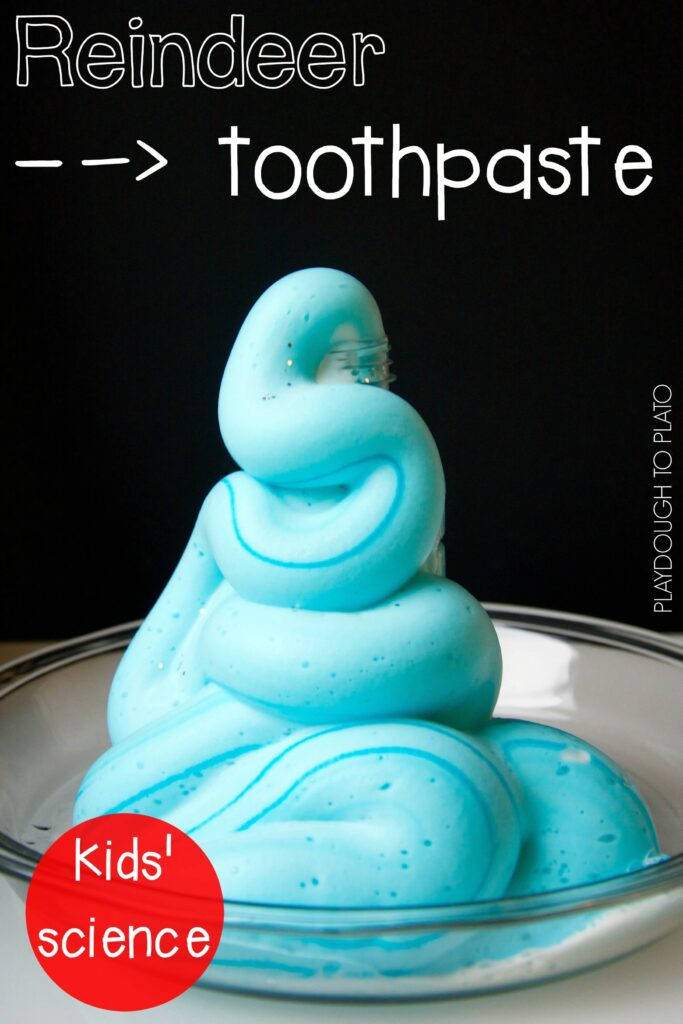 For this demo you’ll need make a quick run to the beauty supply store as well as gather a few supplies from around the house.

Once we had all of our supplies, I called my kiddos over and explained we were going to make reindeer toothpaste.  We started by mixing the 1 tablespoon of yeast with 4 tablespoons of warm water.  Both A and Q took turns mixing the yeast until most of the clumps were gone, but they did end up needing a wee bit of help with the last few sticky chunks. 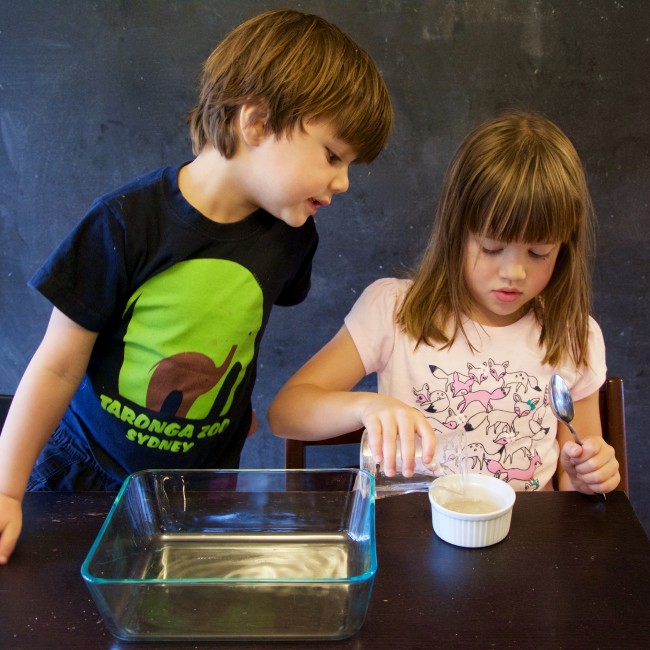 While we waited for the yeast to bubble a bit, we turned our attention to the plastic bottle.  My 3 year old, Q, added a squirt of dish soap, while my 5 year old added several drops of wintery blue food coloring.

Next, we added several good shakes of plastic silver glitter to the bottle using a funnel. 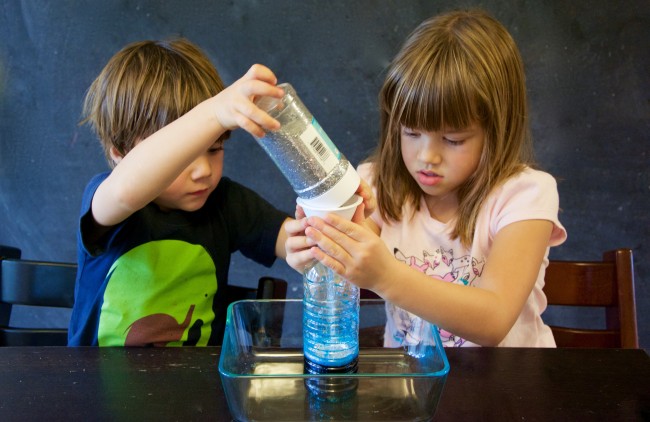 I added a few drops of peppermint essential oil.  We tried using peppermint extract but the alcohol in it caused the reaction to fizzle.

Finally, I added a 1/2 cup of the 6% hydrogen peroxide solution to the bottle and gently swirled it around to mix it.  We couldn’t find our kiddos’ safety goggles so I quickly poured the yeast solution into the bottle using a funnel.  The reaction was immediate, I could barely get the funnel out before the foam had reached the mouth of the bottle!  You can see how fast the reaction is in during our second time making the reindeer toothpaste.  There’s no funnel this time to get in the way of all that foam! 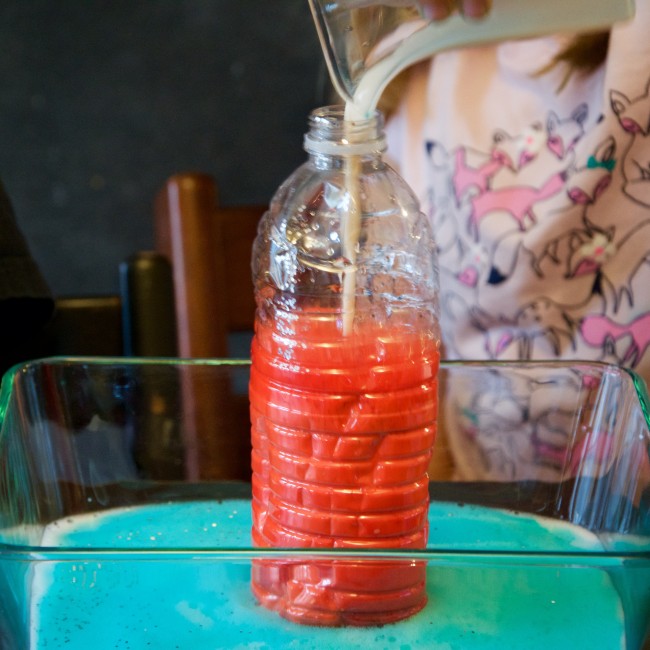 Both A and Q were amazed and couldn’t stop staring as the foam oozed over the edge of the bottle and down the side and filled the pan. 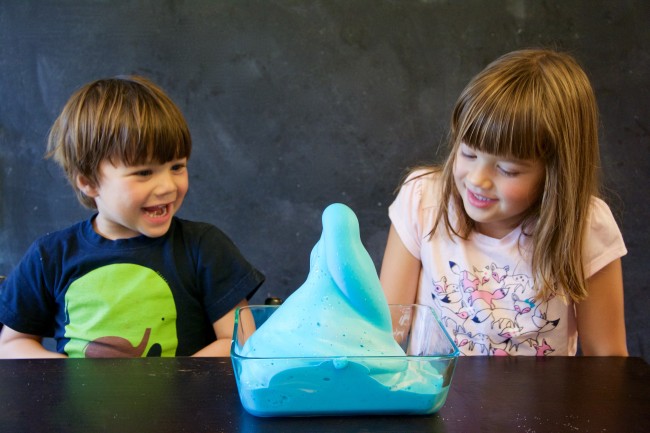 Of course they couldn’t resist touching the sparkly foam and while playing with it noticed the bottle was warm!  “It’s hot!” they exclaimed and then hesitated to touch the foam again. 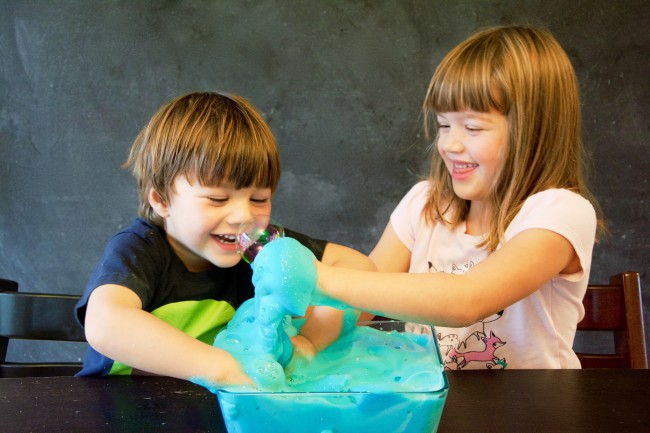 After I explained that it was safe, they both demanded that we do it again.  Good thing I got the large bottle of peroxide! 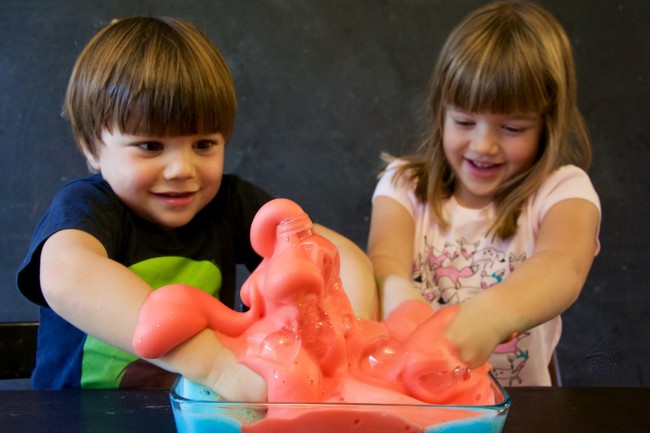 The specific enzyme that acts a a catalyst in yeast is called catalase, a common enzyme found in almost all living organisms exposed to oxygen including people.  So what do you think will happen when you pour hydrogen peroxide on a cut? It reacts with the catalase enzyme in your body and the hydrogen peroxide breaks down forming oxygen bubbles on your skin!

Have you caught the science bug too?! Grab 30 of our favorite, kid-friendly science experiments in one spot!