As soon as my daughter, A,  saw the Easter decorations pop up in stores she began begging me to get out her old basket and eggs.  Considering it was still February, I resisted for a few weeks before I lugged the Easter bin out of storage.  A raced right over – drawn to those brightly colored plastic ovals like a moth to a flame. That’s when I realized I could use that excitement to help her practice reading and writing word families.

I gathered a few supplies: 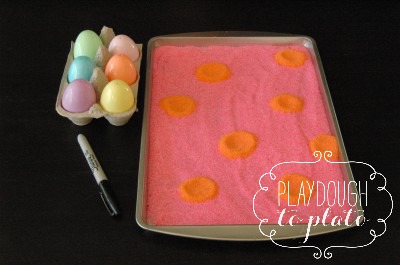 While A ran around with her little brother hiding and finding eggs, I grabbed 6 plastic eggs, an empty egg carton, and a Sharpie.  After cutting the carton in half, I took the pink egg and holding it sideways wrote {at} on the pointy top half.   I then rotated the other half around writing letters, like b, c, and f,  to make different words in the -AT word family.  In a few minutes I had 6 eggs with 6 word families for A to practice. 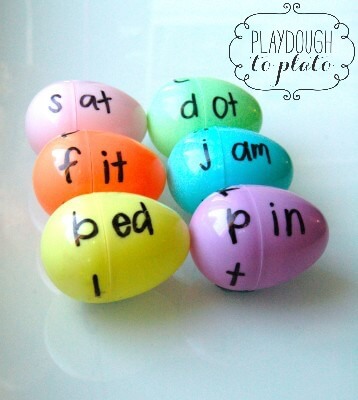 Next, I raided an old sensory bin for some colored salt and used it to cover the bottom of a baking pan.  There are a couple tricks to make writing in salt, sand, or cornmeal successful.  First, try to use a thin layer of salt, too much salt makes the letters hard to read.  Second, line your baking pan with paper that contrasts with your salt to help the letters stand out and help the salt stay in place on the smooth pan surface.   To make die it, I simply placed a couple cups of salt in a Ziploc bag, added a few drops at a time of food coloring and massaged the salt until all the little chunks of dye were mixed throughly.  {Liquid watercolor works well too.} Once it was mixed, I let the salt sit out overnight to dry. {You can also bake it on low for 10-15 minutes.}  Voila!  Now I had  a beautiful medium for letter trays, sensory bins, and numerous art projects. 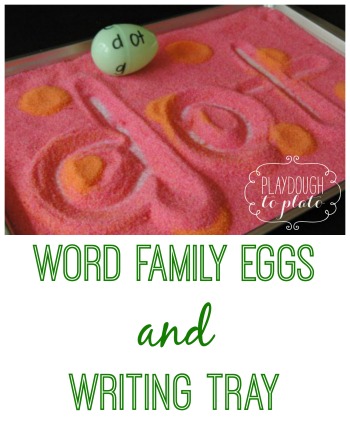 While her brother was napping, I called A over and explained we would be working on word families.  I reminded her that a word family is a group of words that share a similar spelling pattern, such as {bat, cat and fat}.  I asked her to pick an egg and read the word she saw.  A grabbed the green egg with the -OT family on it.  She slowly sounded out the letters C-O-T then exclaimed, “cot!”  I  had her write the word in the sand, making sure she said the letter name as she wrote it.

“Ok, now you can rotate the egg to make a new word,” I explained as I showed her how to spin just the top of the egg to get a new beginning letter.   A loved spinning the tops around to make more -OT words. She did it over and over for a minute before returning to the more difficult task of writing.

As you can see in the photo, A is still working on writing her lowercase letters and occasionally substituted an uppercase.  No worries. I knew that any writing she does at 4 years old is great practice.   After a couple eggs and a dozen words, A grew tired of writing.  Instead, she turned her attention to rotating the shell around and reading the words as fast as she could, ” Ham, jam, ram, slam, dam, ham, jam…”.  In this case, the high speed repetition was a pleasing sound to my ears – which cannot be said for most of the things A insists on repeating!

Check out our other Easter-themed learning activities including Bunny Skip Counting and the free printable Easter Bunny Cover Up: An Estimating Game.