This simple kids’ science experiment uses an apple and your kiddo’s own germs to show little ones just how important hand washing is now that cold season is upon us.  Once my 4 year old daughter, A, could visually see the germs that were on her hands, all battles over proper hand washing have ceased! 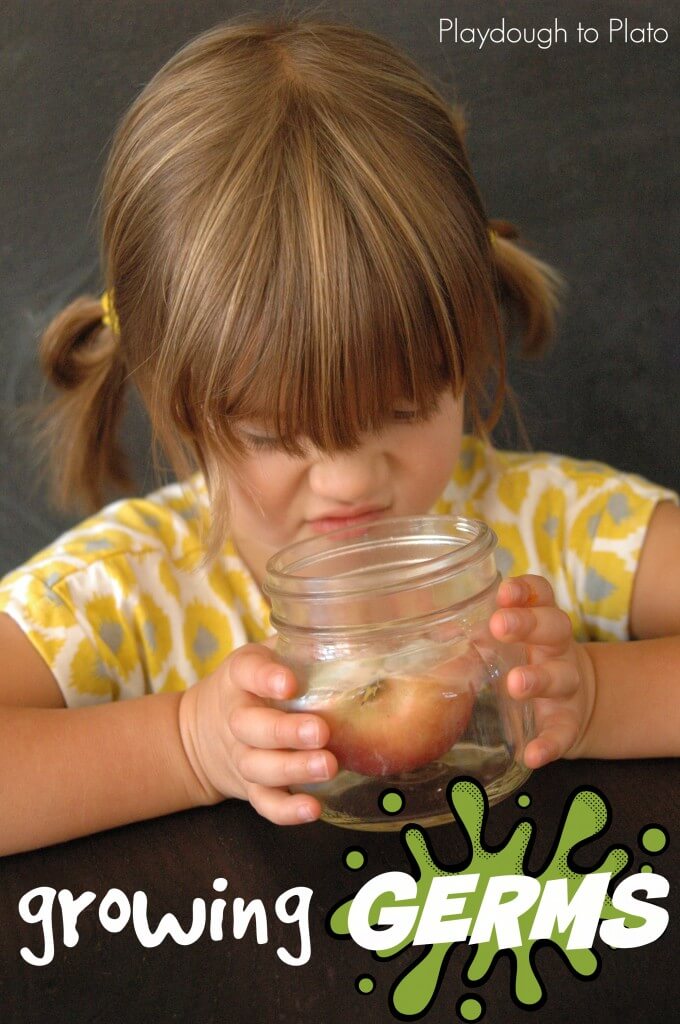 To prep for this activity you’ll need to gather a few supplies: 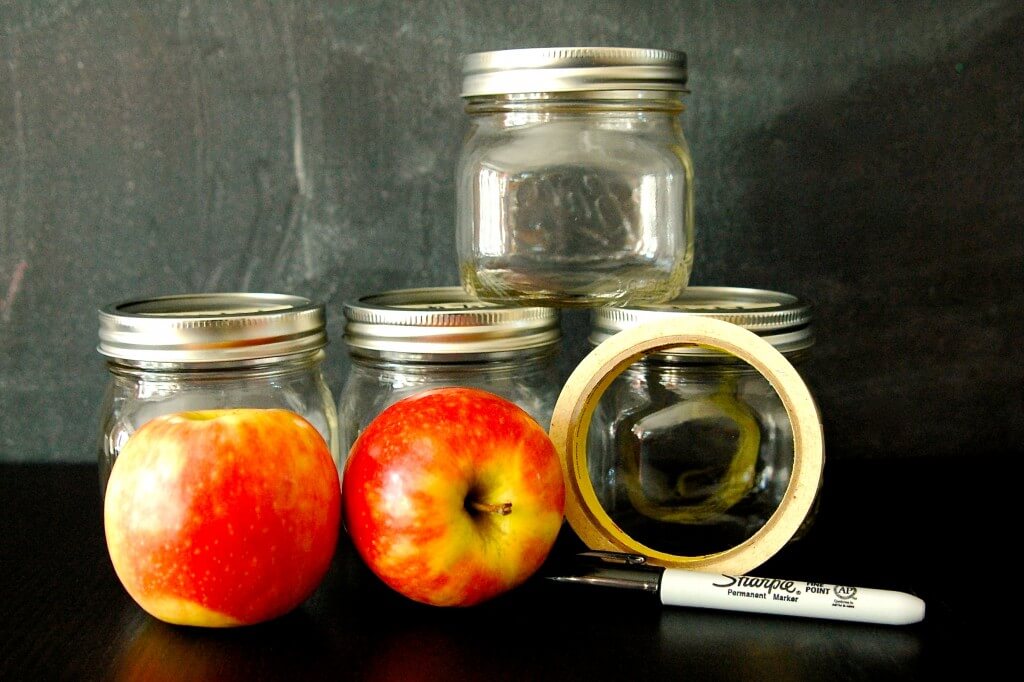 While my daughter was in preschool, I gathered our supplies and labeled each jar with the following labels: 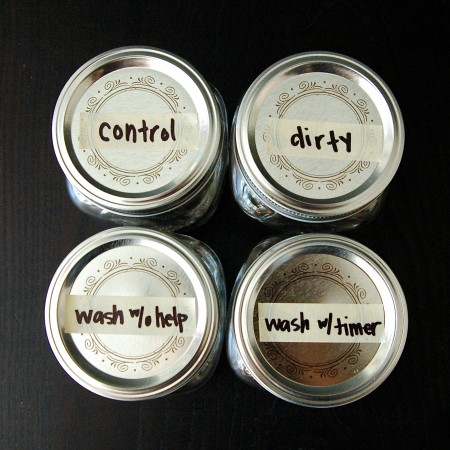 As soon as A returned from school I cut 2 apples in half on a sanitized cutting board, giving us 4 apple halves. I explained to A that we were going to use these apples to see what kind of germs were on her hands.

First, I carefully placed one apple half in a clean glass jar without touching it by sliding it off the cutting board with the knife.  Then I screwed on the lid and explained to A that this apple would be the control – the apple that we didn’t add any germs or bacteria to.  “This will help us see the difference between a regular rotting apple and one you put germs on,” I explained.

Next, I asked A to rub her unwashed, straight from preschool hands all over one apple half and then plop it into the second jar.  She screwed the lid labeled “dirty” on and then I asked her to wash her hands for lunch. 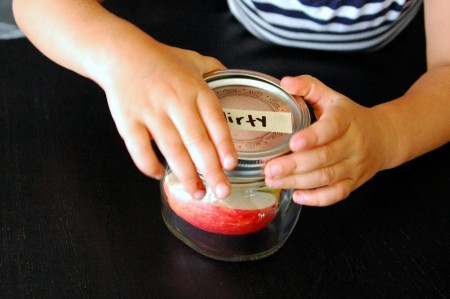 When she returned a mere 30 seconds later, I asked her to rub her hands on the 3rd apple half and put it in a jar.  I handed her the lid labeled “washed w/o help”. She screwed it on and placed it next to the other jars. 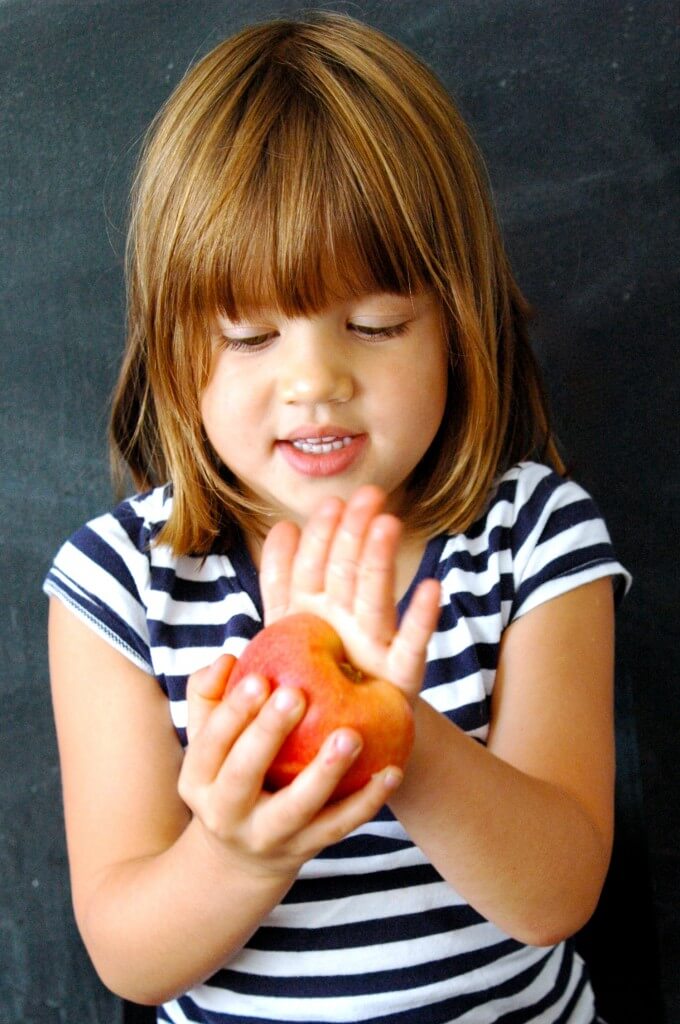 When A asked about the last apple, I explained that we needed to wait till her hands got dirty again to finish it.

After lunch and a potty break, A was ready to wash her hand again.  This time, I joined her in the bathroom and watched to make sure she lathered the tops and bottoms of her hands and between her fingers for a full 20 seconds before rinsing.  Then she ran to grab the last apple half, rubbed her hands all over it, and placed it in the final jar. With the lids on, I placed the jars on a shelf and we went about playing. 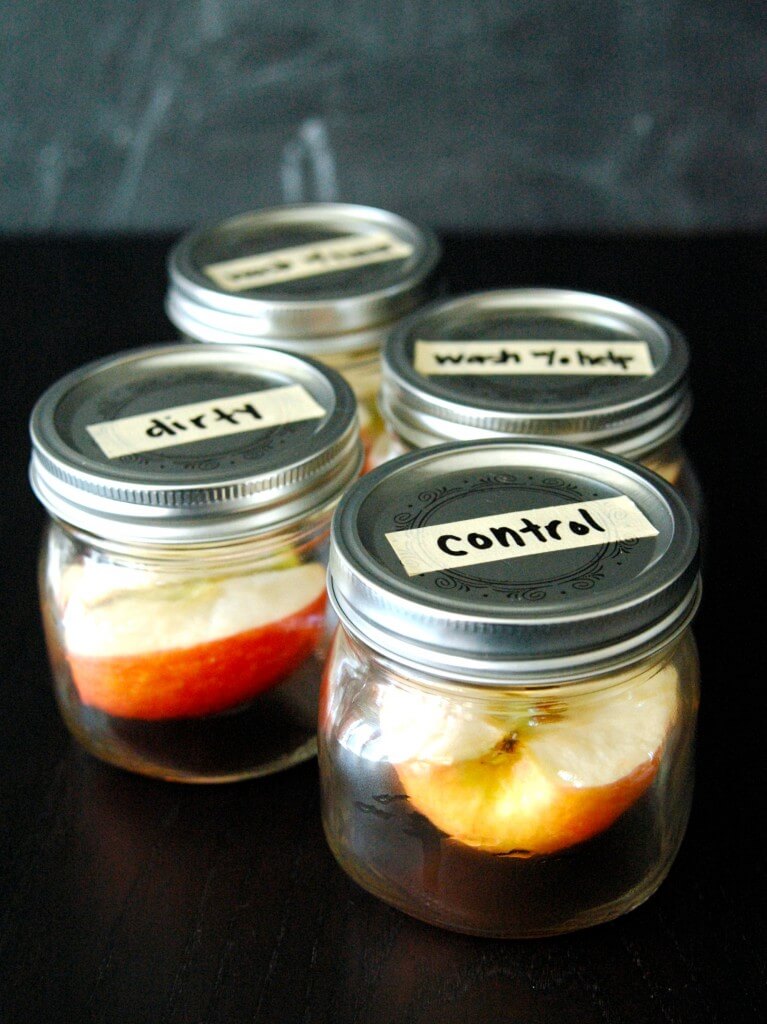 We checked on the apples everyday and didn’t see much besides a little browning for over a week.  A was just about to lose interest in the whole experiment {and I was shocked nothing was growing as expected} when a little something showed up on the dirty apple: MOLD! 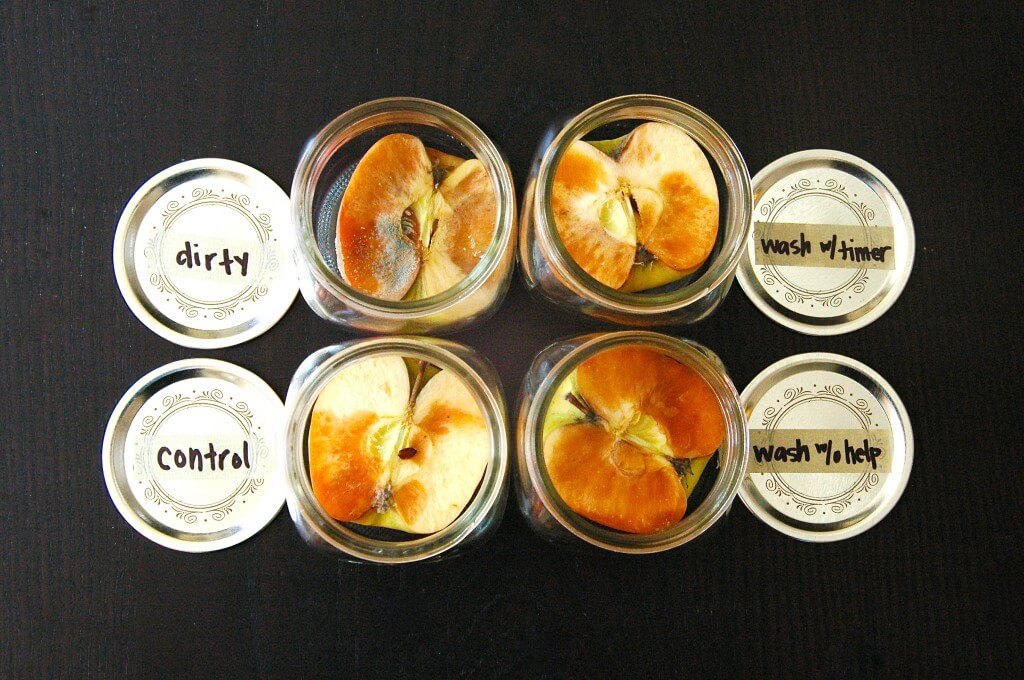 A few days later the gray mold on the dirty apple had grown bigger.  A took one look in the jar and, with a scrunched up face declared, “That’s disgusting!” She pushed the jar across the table.

This got the attention of A’s little brother, Q, who wanted to know what was so gross. After explaining what the black and gray stuff on the dirty apple was a big pile of germs, I had no more arguments from either child when asked to wash their hands.  All I have to say now is say, “Remember the germs we saw on the apple?” and both of them will race to the bathroom.

The apples continued rotting, but the apple with the most mold and bacteria growing on it was, by far, the dirty apple.  The control and washed with timer apples pretty much fared the same so a mere 20 seconds of good scrubbing really does make a difference.  The washed without help apple did have some nasty stuff growing on it but it wasn’t quite as bad as the dirty apple.  Toward the end of the experiment I took the kids out of town and my husband tossed the apple before I could snap a truly disgusting shot.  You can thank him for sparing you those photos.

All in all, I’d say this experiment served it’s purpose and brings a whole new meaning to the saying “an apple a day keeps the doctor away.”

Have more fun exploring science by making homemade pop rockets, pouring a rainbow in a jar and walking on eggs.