In this kids’ science activity, we used candy from my daughter’s Halloween stash to create a beautiful rainbow in a jar.  It was so easy and fun my 4 year old, A, didn’t mind sacrificing a little bit of her candy in the name of science. 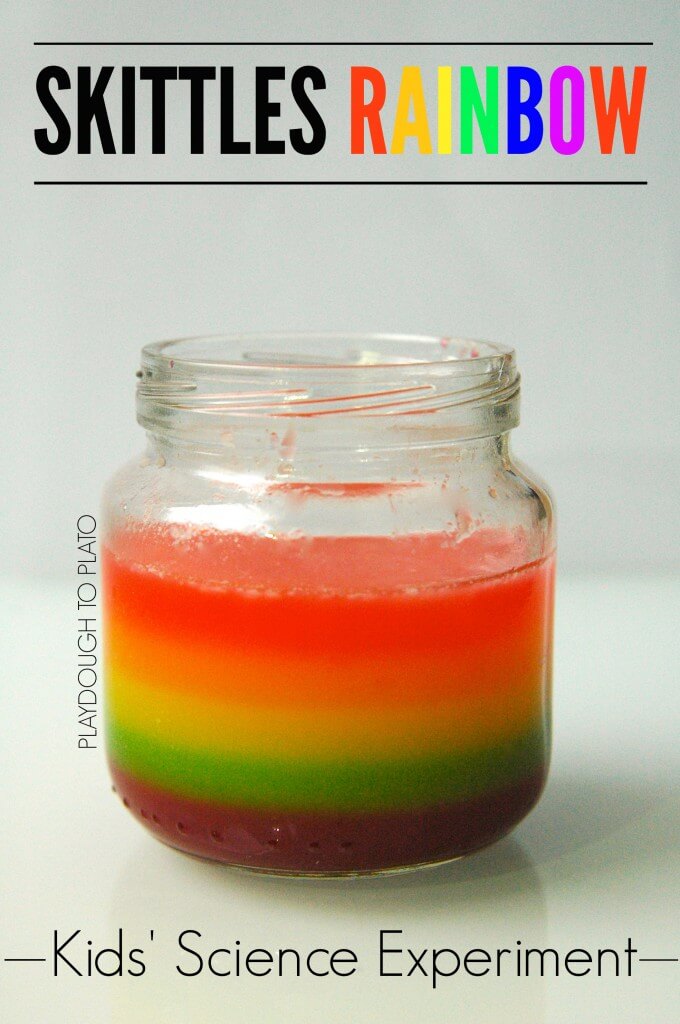 While A rooted through her trick-or-treat bag for some Skittles, I quickly grabbed a few additional supplies:

When A returned with the Skittles, I had her begin by measuring out 2 tablespoons of hot water into each of the 5 glasses. 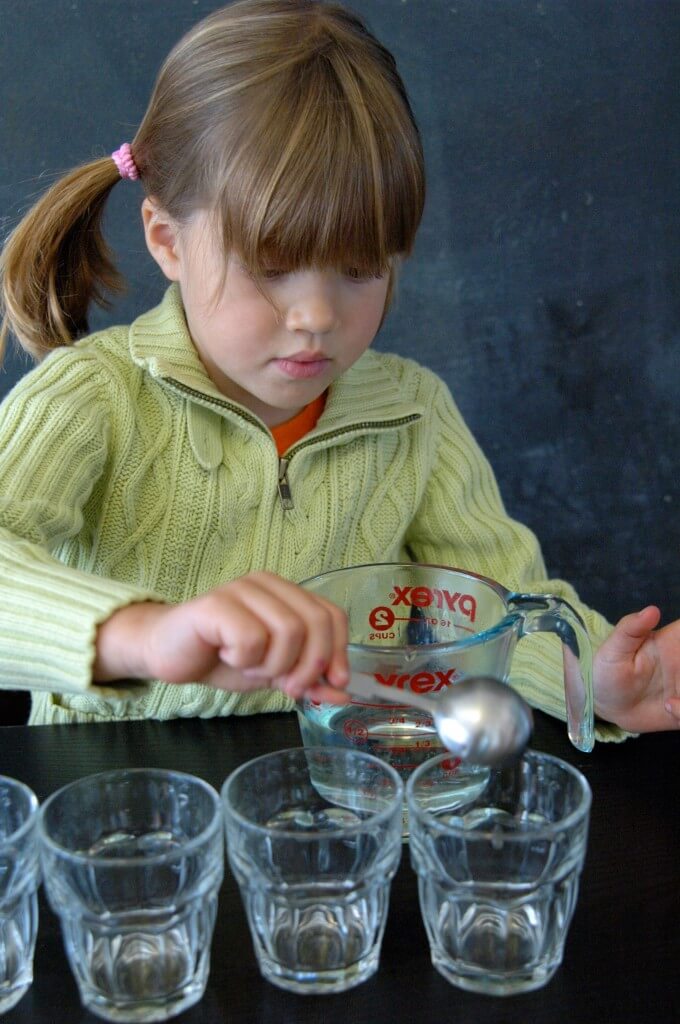 Next, I opened the Skittles and explained that each glass would have different color Skittles in them, but not the same number of Skittles in each glass. We chose to use:

A counted out the correct number for each color and placed them in the glasses of hot water. 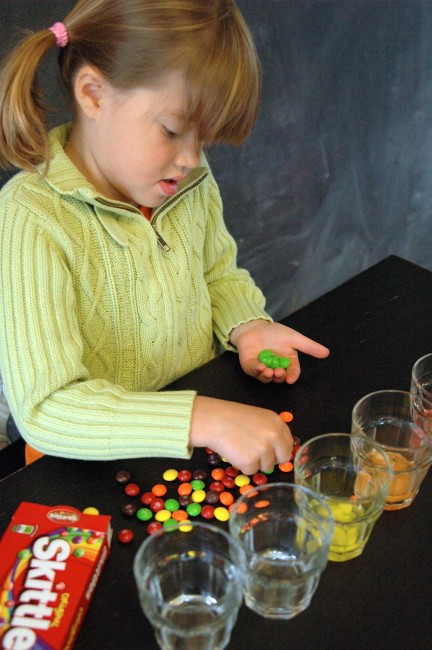 The hot water helps dissolve the Skittles quickly.  If you notice after stirring the candies that they aren’t dissolving, try microwaving the glass for 30 seconds to reheat the water.  Once the candy dissolved, we let the water cool to room temperature.  Cool water is more dense than warm water and you want all your glasses to be the same temperature. 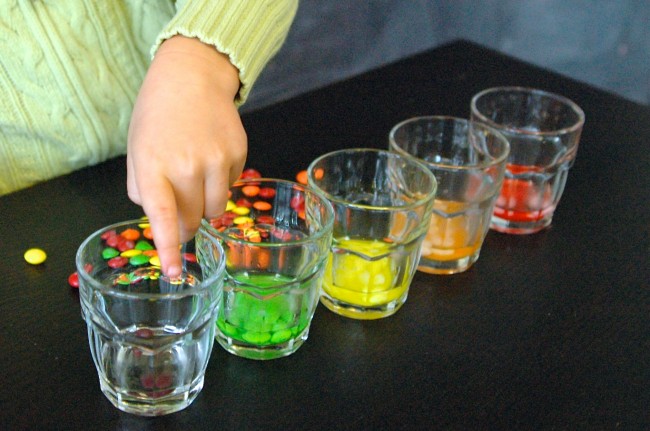 While the liquids cooled, I asked A which color she thought had the most sugar in it.  She instantly pointed to the glass with the purple Skittles.  Then I asked A which color she thought was the most dense – which one had the most sugar molecules in it.  Again she pointed to the purple.  I  had her put the colors in order from most dense (purple) to least dense (red). 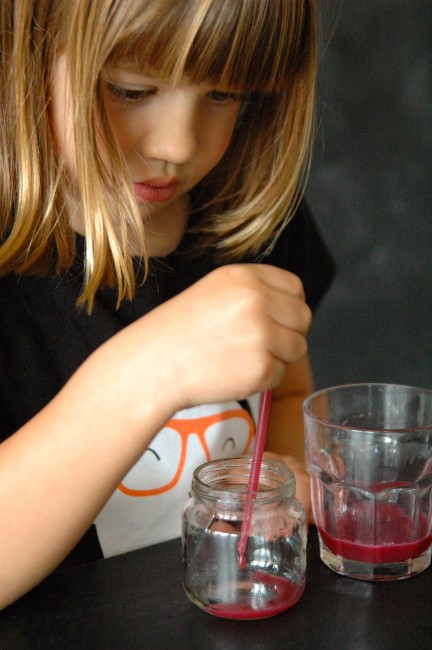 I took over adding the remaining layers starting with green, then yellow, then orange, and ending with red.  A pipette works really well to slowly dribble the colored water down the side of the glass. If you try pouring the different colors in, they will mix leaving you with a jar of muddy brown sugar water.  If you don’t have a pipette, you can use a syringe and slowly dribble the sugar water down the inside of the jar. 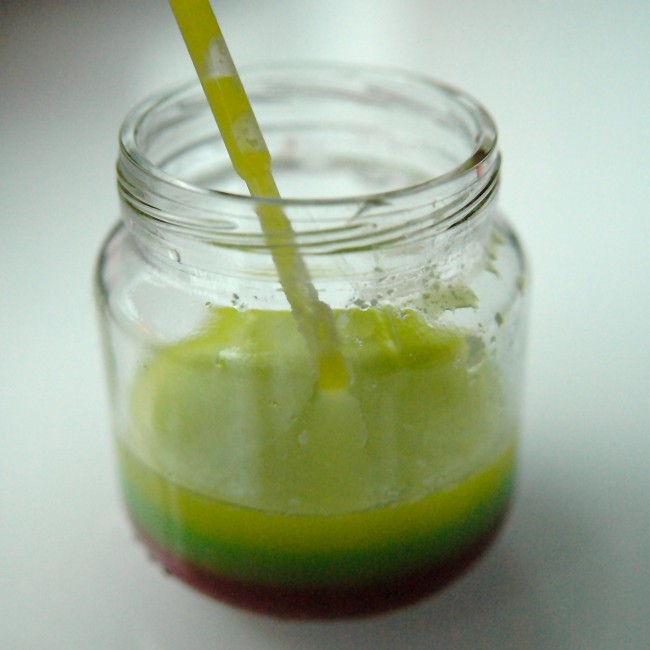 Once all the layers were added we placed the jar in the window and admired the colors as the sun shone through them.  I asked A if she thought the colors would stay separate forever.  “No,” she said, “they will all mix together.”  She was right, after a few days the Skittles rainbow looked like a muddy puddle. Much like real rainbows, the Skittles rainbow should be admired while you had the chance.

For more kids’ science fun, make dancing worms, turn a tea bag into a flying ghost and whip up a batch of glow in the dark slime. 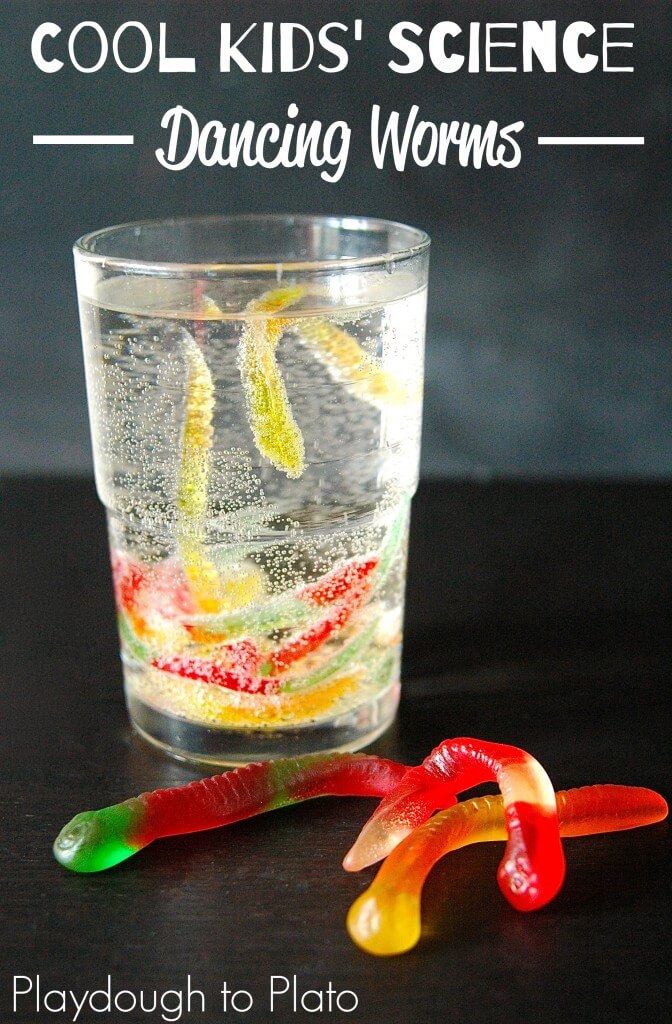