You won’t believe how easy it is to whip up this hot ice science experiment! Just like all of our favorite science projects for kids, you just need a few simple supplies from your pantry: vinegar, baking soda and water.

The prep is quick and simple but the results are pure magic! Your kids are going to want to repeat this science experiment over and over again. 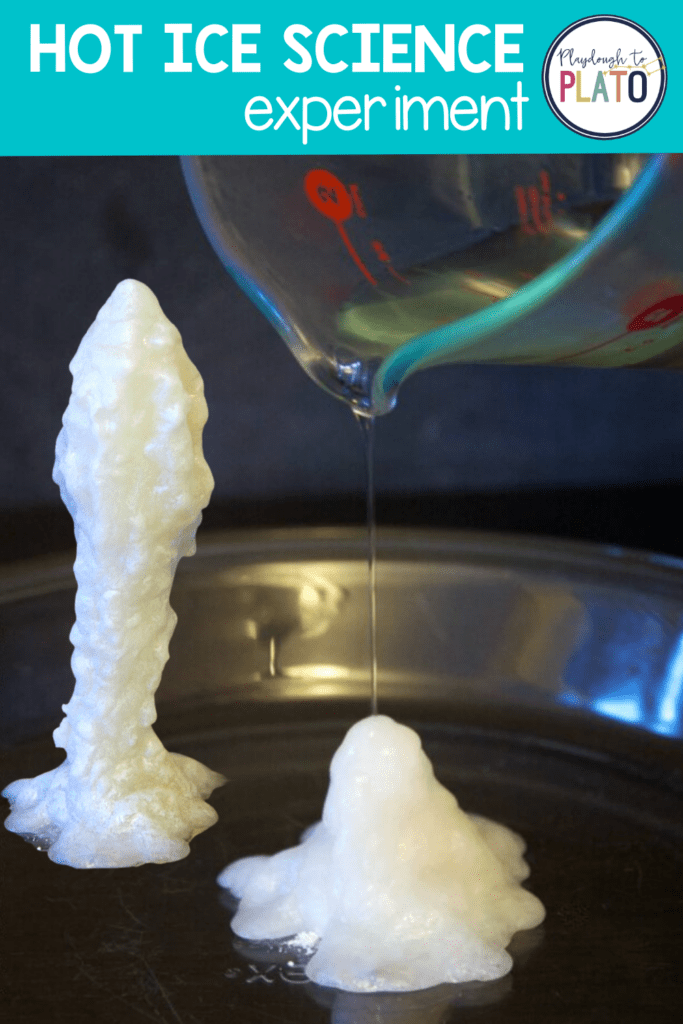 To prep the science experiment, I gathered a few common supplies:

After I collected the supplies, my kids measured 4 cups of vinegar and poured it into a medium-sized pot.

Then they took turns adding 4 tablespoons of baking soda (one tablespoon at a time) to the pot.

NOTE: The key is to add the baking soda slowly so it doesn’t erupt over the edges of your pot. 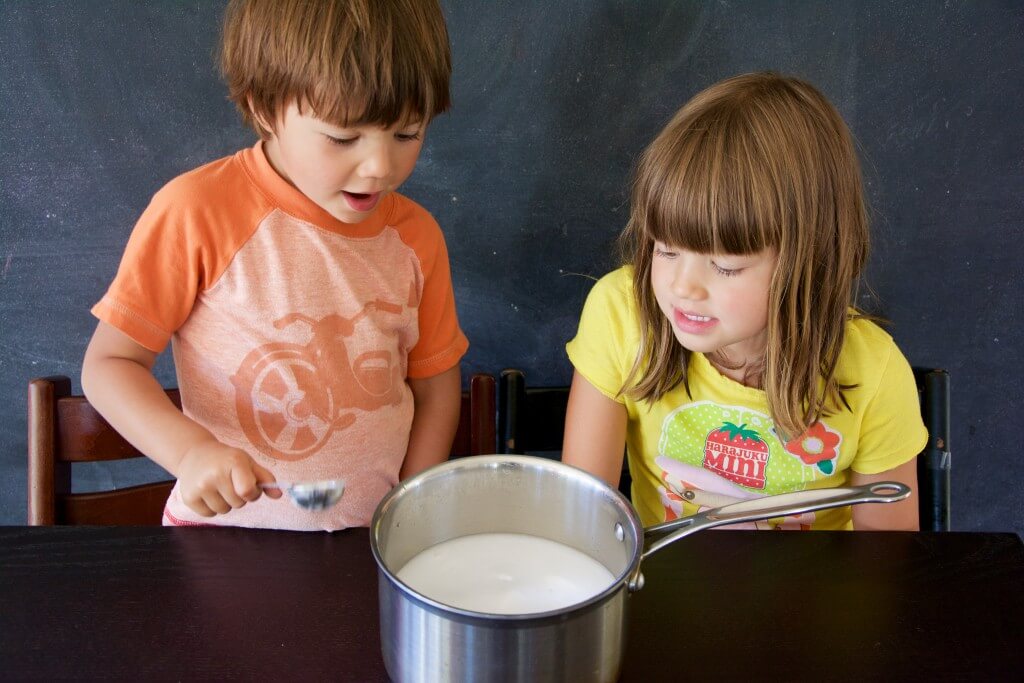 Next, we stirred the mixture until all the baking soda dissolved and stopped fizzing.

Then we slowly boiled the solution over medium-low heat for a little over an hour to remove the extra water.

The solution reduced by about 75% so there was just 3/4 cup remaining. I could see white powdery crystals forming on the sides of the pot near the top of the solution when the solution.

NOTE: If you boil your solution at a higher temperature it may turn yellow-brownish but don’t worry, the experiment will still work!

Next, I poured the concentrated sodium acetate into a glass pyrex measuring cup and placed it in the fridge to cool and scraped a little bit of the dried sodium acetate powder off the inside of the pot to use later.

After about 30-45 minutes, the solution was cool enough to turn into ice.

I grabbed my glass dish and placed a small pile of the sodium acetate powder from the pot in the center.  This would act as a seed for the crystals to start forming. 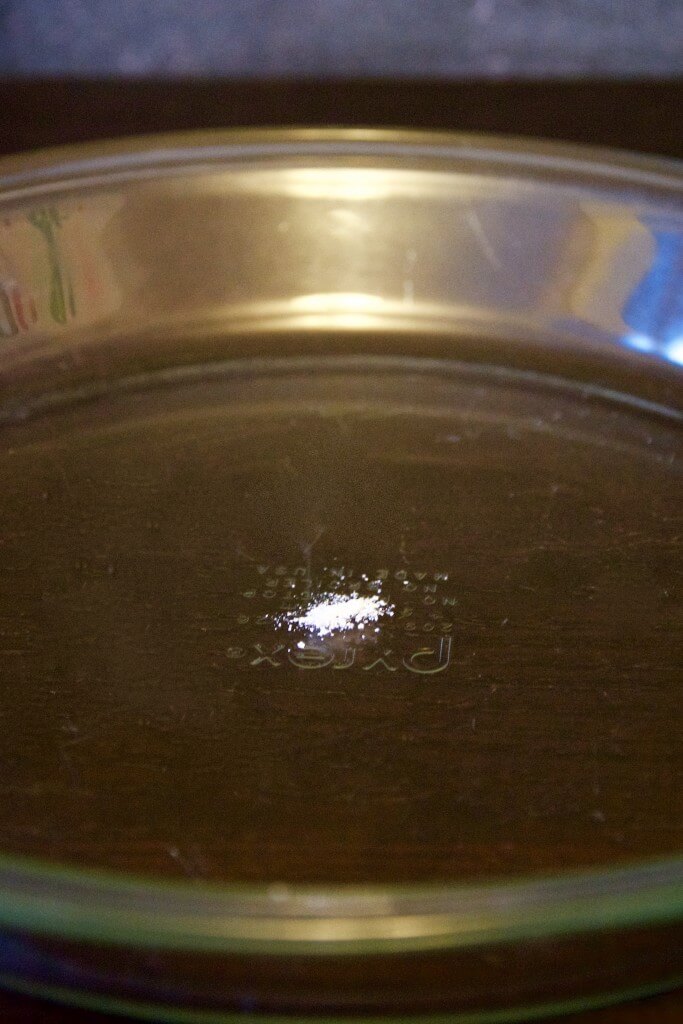 I very carefully took the cooled solution out of the fridge because any bump could start the crystallizing process.

I began pouring the solution very slowly into the pan and crystals began instantly forming. 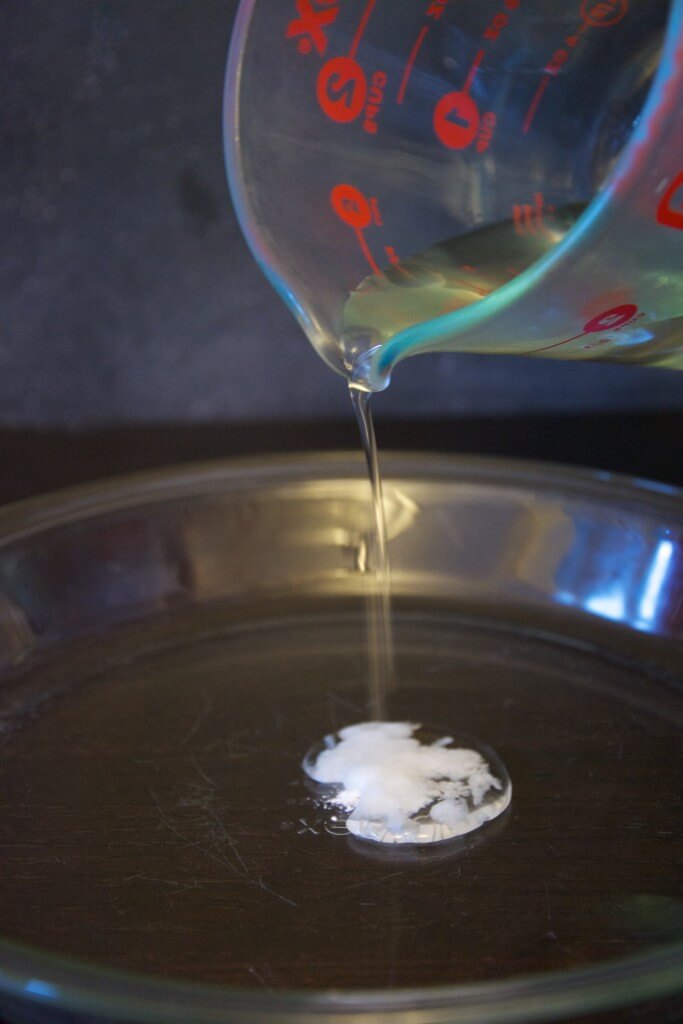 As soon as the clear liquid hit the plate white crystals would form like tiny fireworks.  I continued to pour and the liquid crystallized forming a solid as soon as it touched the growing “ice”. 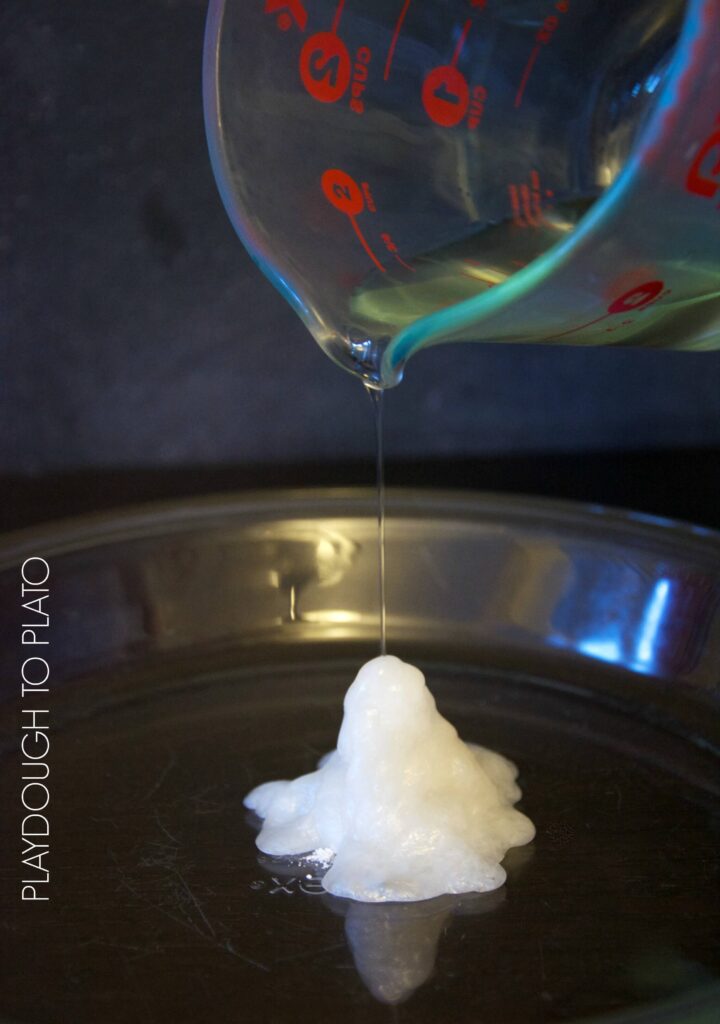 The kids wanted a really tall crystal tower so I poured as slowly as I could. 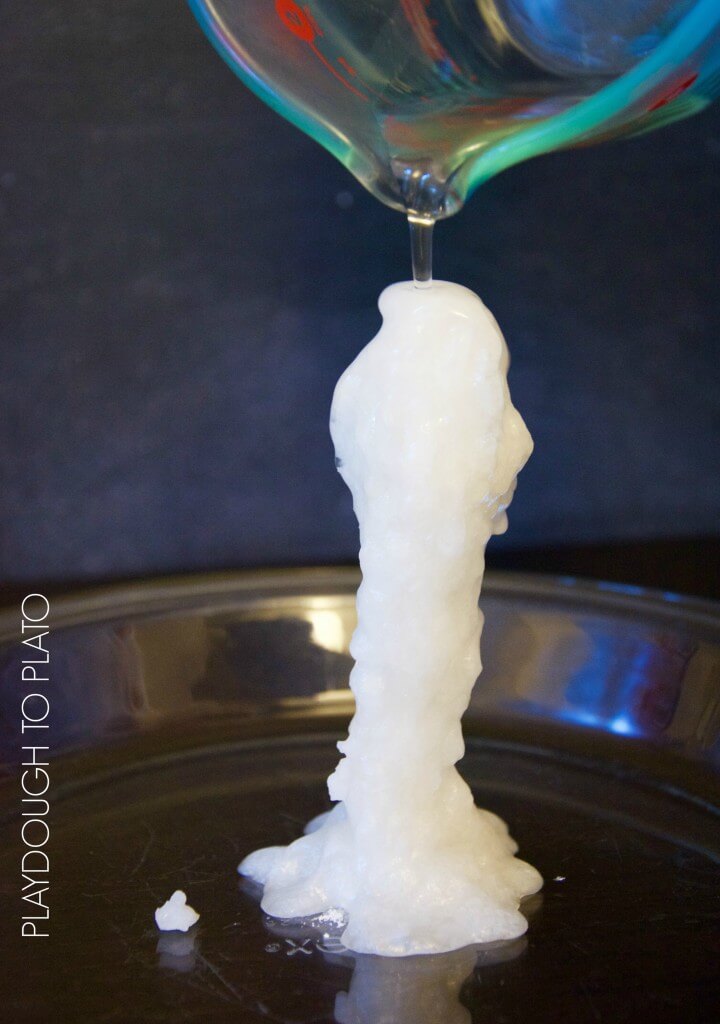 In the end it was over 6 inches tall! 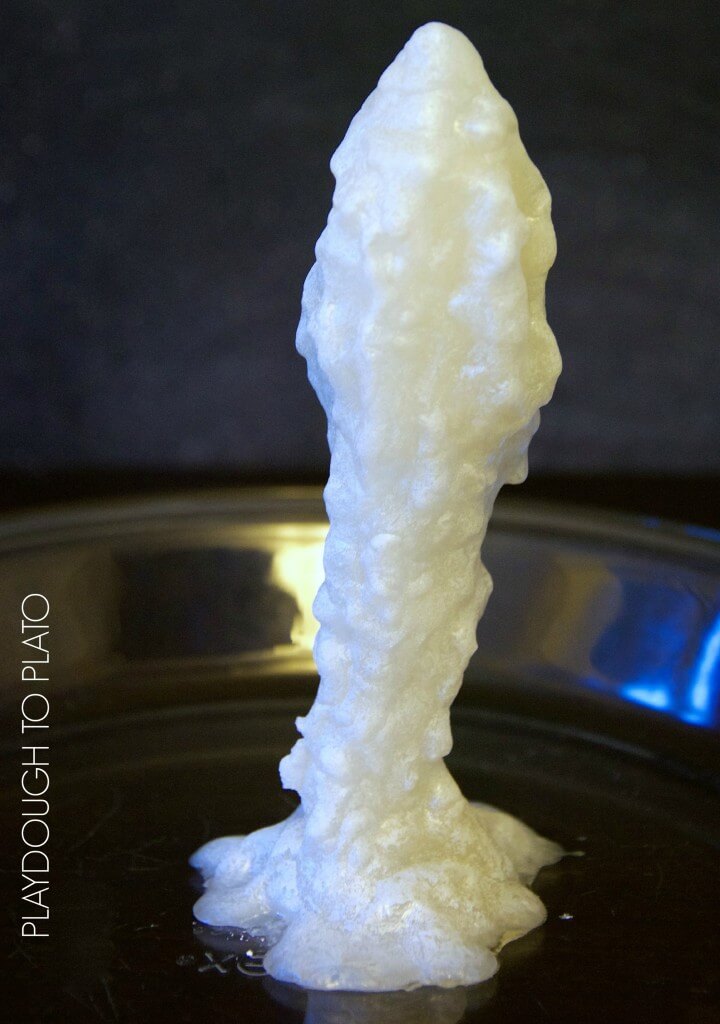 Of course we all just had to touch it. It was hard like ice but was hot!

NOTE: This form of sodium acetate while non-hazardous can irritate skin and eyes just like vinegar can.  So be careful when handling the crystal.  Both of my kiddos ended up crumbling the crystal and didn’t have any reaction but I imagine it wouldn’t feel too good if your kiddo had a cut on his/her hands. 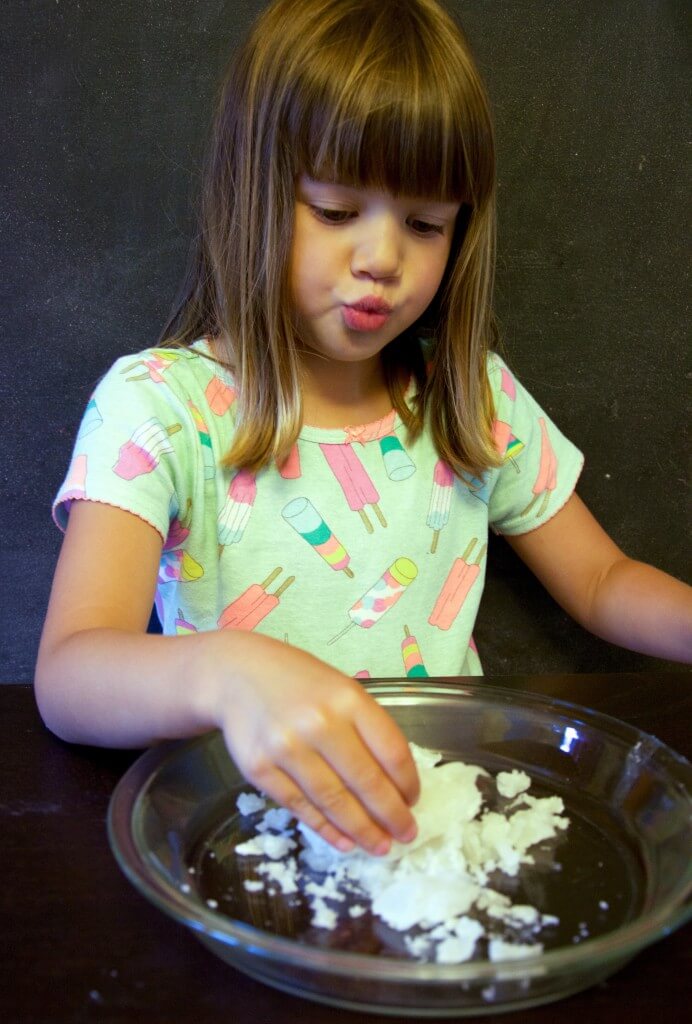 Once you are done creating and exploring the crystallized salt you can remelt it to use again and again.

We ended up repeating the experiment a few more times and every time the cooled solution was ready, the kids came running with excitement! 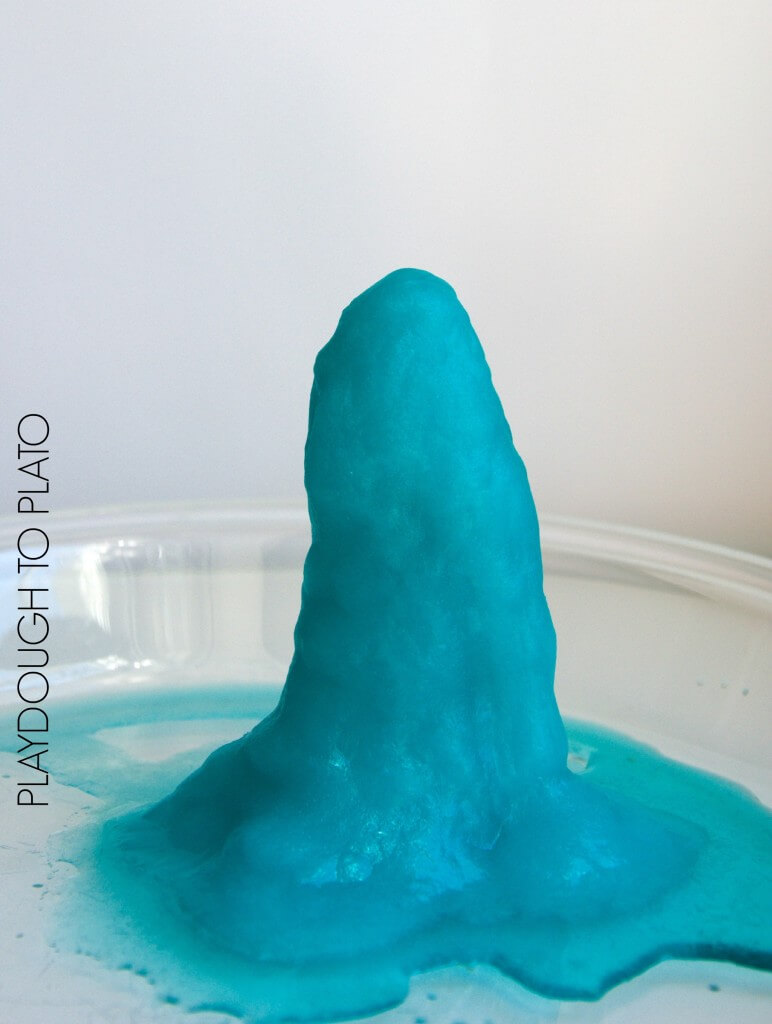 The Science Behind Hot Ice

Once you touch, bump, or add a small crystal that is not liquid, crystallization will begin and the liquid will change to a solid.

When the molecules in the solute (sodium acetate) are in a solution, they normally are surrounded by a solvent (in this case water molecules).

Occasionally, a few solute molecules will bump into each other and stick together for a little while but they will eventually break apart.