What kid doesn’t like a little bit of magic?!  Add in a sweet message and you’ve got a sure fire winner for Valentine’s Day. These invisible ink valentines are a perfect addition to any Valentine’s Day party, friendship unit or rainy day activity. 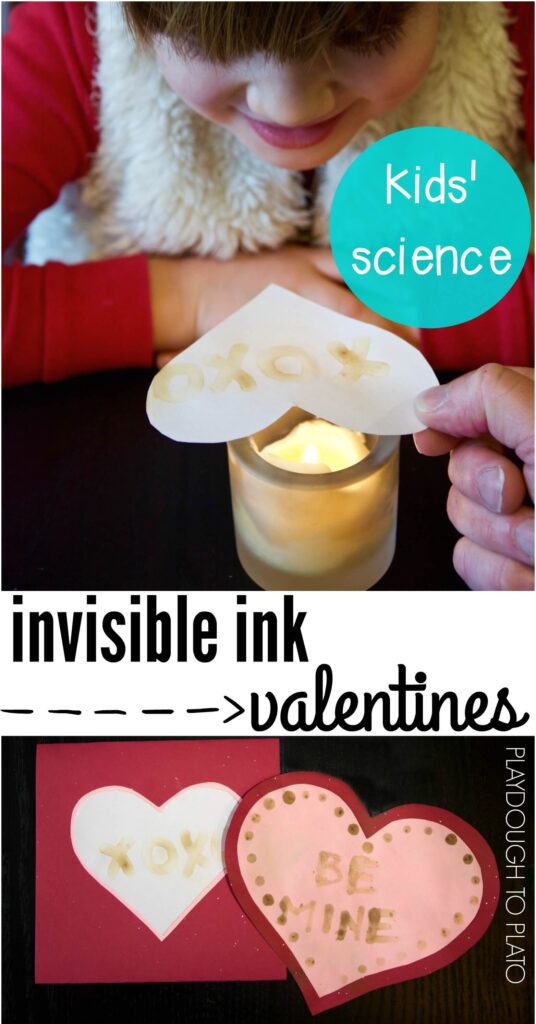 As a kid, I remember homemade valentines being just as fun to make as they were to receive and these oh-so-easy invisible ink Valentines don’t disappoint.  To make these magic Valentines you’ll need just a few simple supplies:

For super simple valentines, you can write your secret message on plain white paper and slip it into a bottle or envelope filled with heart confetti.

My 6 year old, however, wanted to cut out heart shapes to make more classic looking cards.

She began by tracing out heart shapes on pink, red, and white cardstock.  It was a bit of a challenge at first to figure out how to keep the pencil right along the side of the heart she was trying to trace. 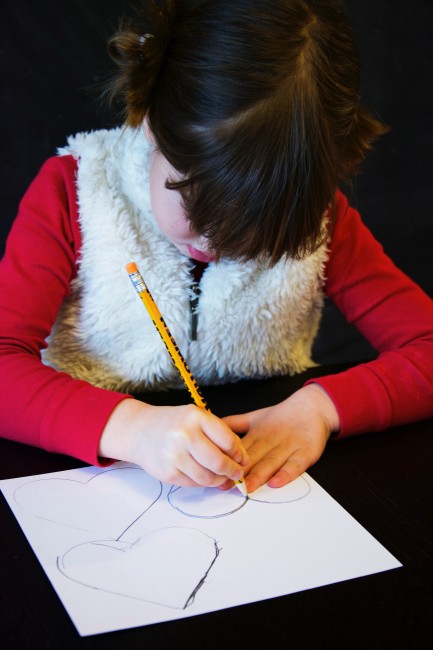 Then she cut out all of the hearts.  It’s a good thing she loves cutting because she had a few dozen to cut out.  I had her make several extra in case she made a mistake when writing with the invisible ink.  Since it can’t be erased any mistake would be tossed. 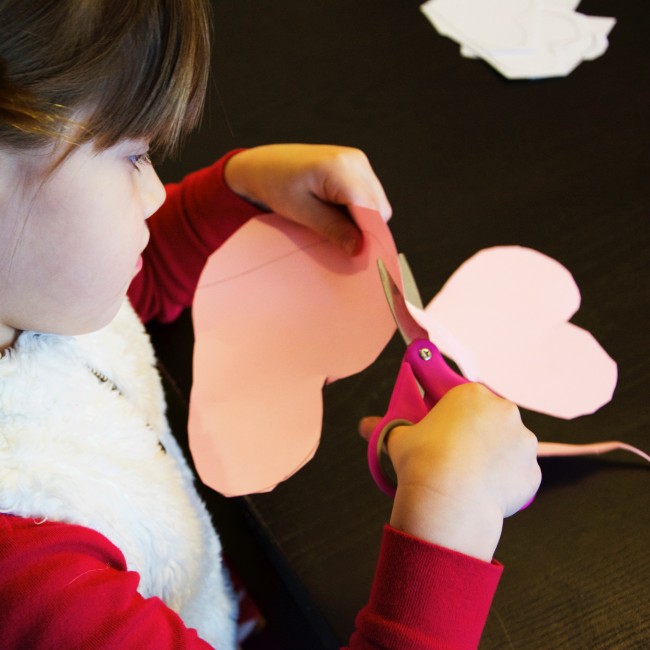 After squeezing a lemon to get its juice, my daughter used a Q-tip to write her secret messages on the hearts.  It took her several hearts to figure out how to fit her message without running out of space. 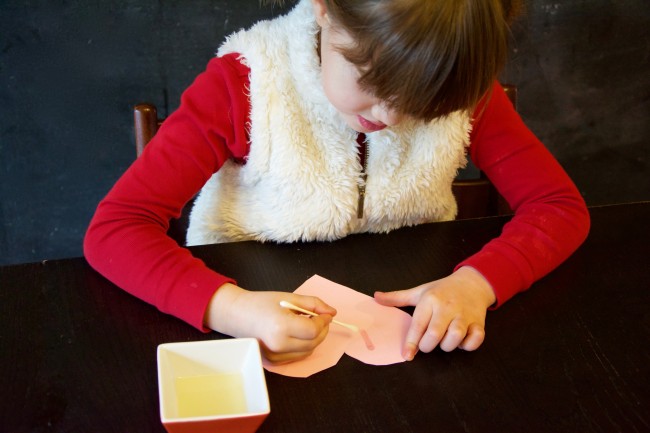 Once the lemon juice dried, it was time to reveal the magic.  At first, my daughter was a little apprehensive about holding paper over a candle but, once she saw her message slowly appear, her face was all smiles. 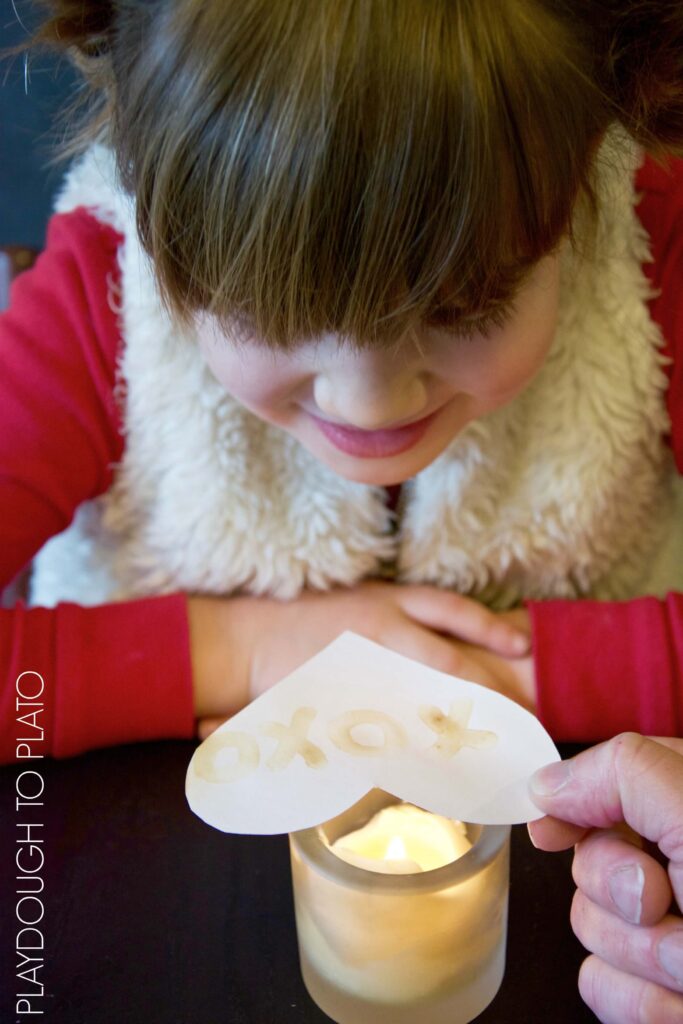 Obviously,  this requires an adult’s help and you’ll want to keep the heart several inches from the flame.  It’s a good idea to keep a bowl of water close by too.  If you  accidentally light your heart on fire, you can simply toss it in the bowl to extinguish your burning heart.

It’s best to take this part slow and be patient.  The heat from the flame reveals the message and eventually enough heat will build up under the valentine so don’t be tempted to rush the process by holding the card too close to the flame.

You can also use a light bulb or hair dryer to reveal the hidden message.  We tried using a light bulb at first since it seemed safer than an open flame, but it took a really long time and the letters were really faint.  The candle was notably quicker {it still takes a few minutes} but it was easy for my daughter to get relatively close and see the letters appear.

We opted not to try the hair dryer as the loud hot blasting air just seemed to take away from the magic of it all. 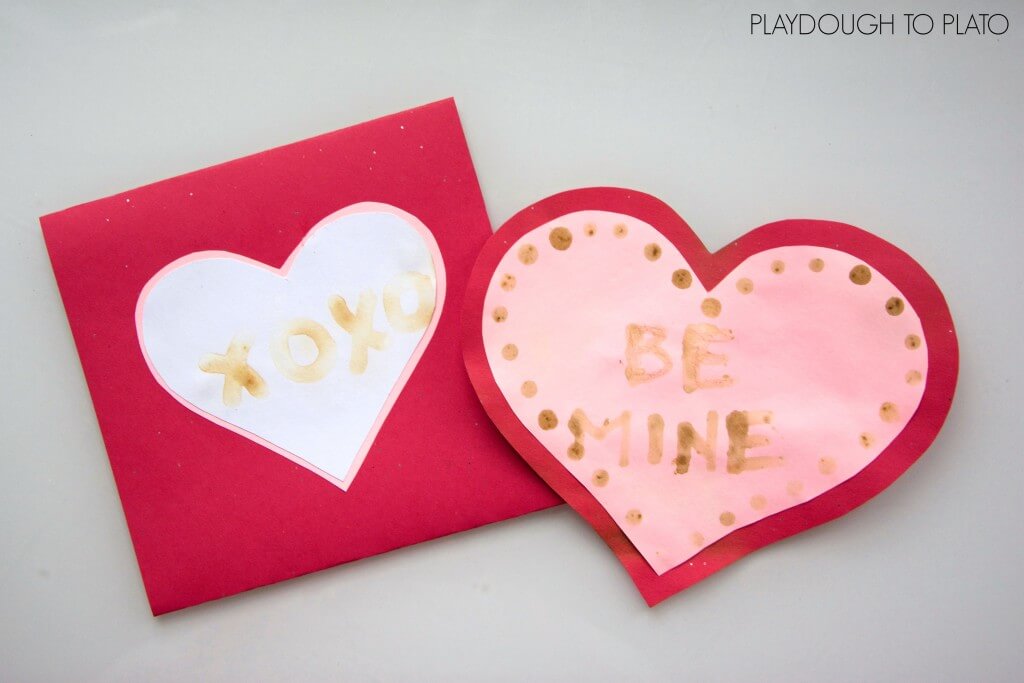 Lemon juice is an organic substance meaning that it contains carbon molecules.  When you paint the lemon juice solution onto the paper, the carbon-based compounds absorb into the paper’s fibers.

When you heat the paper, the heat causes some of the chemical bonds to break down, freeing the carbon.

Once the carbon comes into contact with the air, it goes through a process called oxidation.  When oxidation has occurred, it turns the paper brown, revealing the message.

Oxidation doesn’t always need heat to occur. Can you think of some fruits or vegetables that turn brown when left out on the counter?

For even more science activities kids love, grab our Super Cool Science Kit packed with 30 must-try science experiments and a corresponding science journal. It’s perfect for any classroom or homeschool!